Black holes are invisible, hence difficult to detect. There are, however, methods to establish their presence
in various astronomical systems, one was even rewarded with a Nobel Prize. After a short description of black-hole properties, I will review several observational techniques used to find and identify these purely gravitational objects.

Such rapid transformation has been achieved with a mixture of cultural, governmental, financial and market factors. The combination of long term planning, consistent financial support, active recruitment of overseas Chinese talent combined with the local characteristics of east Asian societies allowed the Chinese Science and Technology sector to repeat and even exceed the successes of their Japanese and Korean counterparts.

Meanwhile, the sheer size of the Chinese population and economy suggests its leading global role in the years to come. However, due to perception, distance, and communication barriers, the current status of Chinese Science and Technology sectors, its overall structure and characteristics are generally poorly understood in the West. This lecture provides a glimpse into the Chinese education, science and technology sectors and highlights some fields where valuable lessons could be learned.

A growing proportion of human activities―such as social interactions, entertainment, shopping, and gathering information―are now mediated by digital devices and services. Such digitally mediated activities can be easily recorded, offering an unprecedented opportunity to study and assess psychological traits using actual (rather than self-reported) behavior. Our research shows that digital records of behavior―such as facial images, samples of text, Tweets, Facebook Likes, or web-browsing logs―can be used to accurately measure a wide range of psychological traits. Such predictions do not require participants' active involvement; can be easily and inexpensively applied to large populations; and are relatively immune to misrepresentation. Consequently, the predictability of psychological traits offers a promise to improve research and practice in fields ranging from psychology, sociology, and education to management and marketing. However, if applied unethically, the same models pose unprecedented risks to the privacy and well-being of entire societies.

About the speaker: prof. Avi Loeb

The search for extraterrestrial life is one of the most exciting frontiers in Astronomy. First tentative clues were claimed close to Earth: the weird interstellar object `Oumuamua and the cloud deck of Venus. Our civilization will mature once we find out who resides on our cosmic street by searching with our best telescopes for unusual electromagnetic flashes, industrial pollution of planetary atmospheres, artificial light or heat, artificial space debris or something completely unexpected. We might be a form of life as primitive and common in the cosmos as ants are in a kitchen. If so, we can learn a lot from others out there.

With the ever growing human population, we continue straggling to feed the world. Our population is approaching 8 billion people now, and is predicted to reach 9.7 billion by 2050, according to the UN projections. Even if the growth rate is slowing down, the population will continue to increase until the end of the century and, perhaps, beyond. In recent two centuries we proved that we are able to fulfil the growing demand for food by improving our agricultural practices, developing new, more productive crop varieties and expanding farmland at the cost of natural environments. This last option seems, however, to approach its limits as already now the destruction of natural ecosystems brought massive decrease in biodiversity, compared by some scientists to the largest five extinctions in the Earth history.

Despite the impressive achievements of modern agriculture, huge losses in crops are still caused by weeds, diseases and pests. Insect pests alone can cause loses reaching 70-80% of the harvest, in particular in tropical countries. To prevent these, various techniques were used for centuries but only two modern ones proved to be efficient enough to indeed prevent major damage to crops – these are pesticides and genetically modified organisms (GMO). With the needs and limits drafted above, i.e. the growing demand for food and limited farmland area, we have to realize that in the coming years, perhaps centuries, we will depend on such means to secure yields large enough to feed the world. The question is, thus, not whether we should use pesticides or GMO, but which the better choice is. GMO in particular have gained bad press in recent years, and whole regions or even countries have been declared “GMO-free”. During this seminar I will briefly present the challenges facing us in terms of securing food for the growing population and discuss the advantages, disadvantages and fears associated with using pesticides and GMO. After the presentation, I would like the participants to engage in a vivid yet scientifically grounded discussion, hence I recommend preparing for it beforehand by looking through some publications on the topic.

There are currently two, viable cosmological theories: the standard (LCDM) model; and a theory due originally to Mordehai Milgrom called MOND. Both theories can claim to successfully explain a wide variety of observations, both on small (galaxy) and large (cosmological) scales; but only the standard model postulates the existence of dark matter. This situation is similar to what philosophers of science call “empirical equivalence”: when two, ontologically distinct theories make the same predictions about observable phenomena. Philosophers claim to know how to decide between theories in cases like this. The essential quality of a true theory is that it correctly predicts facts in advance of their observational determination: that is, it anticipates the data: it makes successful novel predictions. I will argue that only Milgrom’s theory achieves this. The standard model, at least since the addition of the dark matter postulate ca. 1980, can sometimes accommodate new data in a retrospective and statistical fashion but has made few if any successful new predictions. I will discuss the implications for experimental dark-matter searches and for science pedagogy.

Despite the progress made at the Paris climate talks with respect to reducing emissions of greenhouse gases it is possible that the rate of environmental change may result in extensive negative impacts for humans and natural ecosystems. Clearly, emissions cuts are essential to managing climate risk and reducing climate change. However, given the potential consequences of a high rate of environmental change, it is important to investigate complementary approaches. For example, geoengineering methods aimed at altering Earth's radiation budget may offer a fast-acting way of moderating the rate of climate change. However, such geoengineering approaches entail a number of new risks, and cannot replace reducing CO2 emissions/levels. I will discuss different geoengineering methods, focusing on new approaches to stratospheric solar radiation management, highlighting technical capabilities and risk. I will discuss physical and chemical properties of the ideal stratospheric solar geoengineering material and potential candidates, such as diamond and calcium carbonate, which may greatly reduce stratospheric ozone loss and changes in stratospheric dynamics. I will also discuss questions surrounding the potential implementation of such approaches. 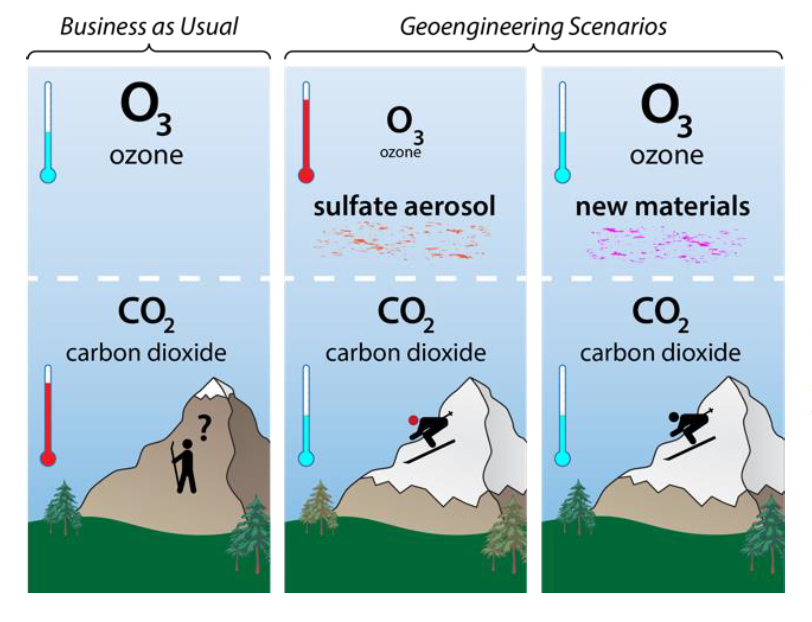 In the recent years we have witnessed the incredible development of gravitational wave astronomy.
The first source, a binary consisting of two black holes, was detected in 2015 and it brought a revolution in astrophysics. Following  years brought additional discoveries, like merging neutron stars, alerted almost entire word of astronomy.
In my lecture I will summarize these discoveries, present the basics of graviational wave detection techniques, as well as technological challenges that it faces. I will also present the basic physical picture that allows to
draw conclusions about the nature of observed systems based on simple information contained in the time series of the observed gravitational wave signal.

I shall present one of the most famous mathematical stories of early 21st century. Between November 2002 and April 2003 Grigori Yakovlevich Perelman, a Russian geometer working in the St. Petersburg section of the Steklov Mathematical Institute has published three preprints, announcing (among other things) the proof of Poincare's Conjecture, a famous problem in topology, which had been open for roughly 100 years. His solution was very surprising and unexpected for the majority of mathematicians: he used the so-called geometric flows and methods of mathematical analysis that did not belong to the standard toolbox of topology. In 2006, he was granted the Fields medal, and in 2010 - a million dollar prize of the Clay Mathematics Institute. He accepted neither of the two. I do believe that his reason to refuse those prizes was his own understanding of the meaning of honesty in science: what it is and how should one go about it.
It is interesting to notice that methods of solving various differential equations similar to those considered by Perelman are used also in some very specific and very concrete applications of mathematics, e.g. to clear photographs from random noise. This can be treated as evidence that the frontier between theoretical and applied mathematics is, in the best case, pretty fluent.

As an astrophysicist I studied the mysteries of supermassive black holes using arrays of Cherenkov telescopes and when the resolution of these gigantic observatories was insufficient, I proposed using galaxies as high-resolution cosmic telescopes. After receiving Ph.D. in astronomy and physics from Nicolaus Copernicus Astronomical Center in Warsaw and Paris Sud 11 I become an assistant professor at Astronomical Observatory of the Jagiellonian University. Seven years ago, I arrived as a post-doc to work as a NASA Einstein Fellow at Harvard. There, just as a hobby, I invented a new technology that turns earbuds into high-precision devices to gather biometric data. The scientific endeavors pursued in my free time become now a fast-growing start-up with 10 full-time employees and prototypes in clinical trials. During the seminar I intend to present "lessons learned" about how to turn the scientific experiments into a business. Critical takeaways on founders' agreements, winning investors, building teams, contracts, and intellectual property protection will be discussed.